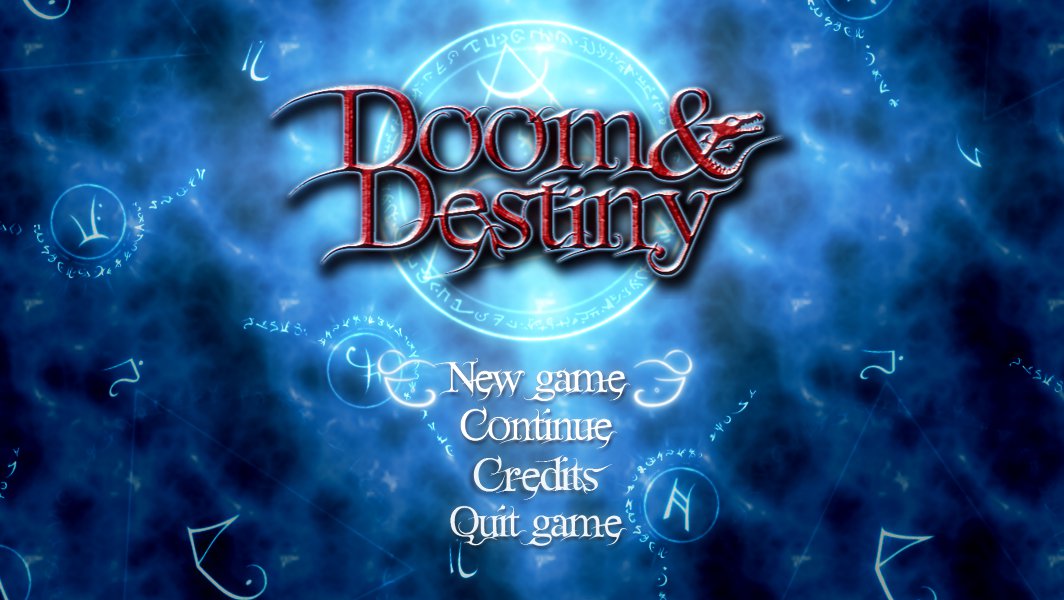 If you have heard the term JRPG recently, then chances are it was in a negative light. Somewhere in the past decade, this once extremely popular genre got a bad rap. Was it the overabundance of Anime styled heroes, linear stories or maybe the overly complicates mechanics that killed this genre? Only time will tell.

In spite of its flaws, JRPGs are still a genre I love to dabble in, especially if they are indie games. The indie field seems to be taking JRPGs in lots different directions. Some take retro 8-bit or 16-bit graphics and do things you wish people thought of decades ago, while others are using the medium to tell unique and creative stories. Stumbling across some really neat JRPGs this past year has made this gamer very happy.

The game Doom & Destiny has been one such find for me this year. At first glance I shrugged this title off when I noticed it in the RPG section of Xbox Live Indie Marketplace. The graphics looked mediocre, and it said it was made with RPGMaker. Then I noticed several screen shots recreated several areas from the original Legend of Zelda, and the dialog looked amusing. I figured with a free demo available, I would give it a shot. Since you see I am writing about Doom & Destiny, you can deduce I really enjoyed it.

While Doom & Destiny is not a perfect game, it will strike a chord with those that grew up watching 80’s cartoons and playing NES games of yester year. That’s what sucked me in fast. The basic idea seems to be loosely borrowed from the old Dungeons & Dragons cartoon from the 80’s. Four friends gather to meet in another friend’s garage for a D&D knock off game called Doom & Destiny. Since their friend is not home they look around and stumble upon a book that sucks them to another world. The new world seems to be really backward and stuck in silly tropes of older games and cartoons. Sounds dumb, but some really clever writing pulls it all together fantastically.

Each of the four heroes are not bland either, they are each foils of iconic characters. Mike the Pirate/Cleric is tied to Michelangelo of the Teenage Mutant Ninja Turtles, except no one laughs at him in this (they actually trash talk him every chance they get).  Johnny is the leader/fighter and resembles a cross of most cartoon macho leads like Commander Keith from Voltron and the Red Power Ranger.  Nigel the wizard seems to be an extremely dorky version of Billy the Blue Power Ranger (Yes, I’ll admit I watched the first era of Power Rangers. Don’t judge me!). Finally Francis the Ninja is another borrowed from TMNT that clones Raphael right down to the bad attitude that made him a fan favorite. All together the mixed ensembles merger of personalities will draw you in right away with one-liners and dorky jokes.

The weakest part of Doom & Destiny is the battle mechanics. It really does not do anything interesting here. Expect random battles galore and a pretty basic level up system that feels easy to exploit. If you have played a Final Fantasy or Dragon Quest game then you know what to expect but with a humorous approach.

Overall Doom & Destiny is a giant nostalgia trip. It gives you mocking renditions of classic games like The Legend of Zelda, Super Mario Brothers, and Final Fantasy, and then it makes you laugh at the cheese shows you loved as a kid. Who can’t appreciate that? No one, I tell you! While it does have some weak mechanics and visuals, the humor and writing make up it tenfold. Only costing two or three bucks on Xbox Indie Marketplace, it makes a low cost risk for a good laugh or two. I found it a great way to use up a few space points I had floating around on my Live account.

Should you like what you see and play, Doom & Destiny is also on Steam Greenlight. Give them a vote, these guys could use it. I know I’d buy it again!