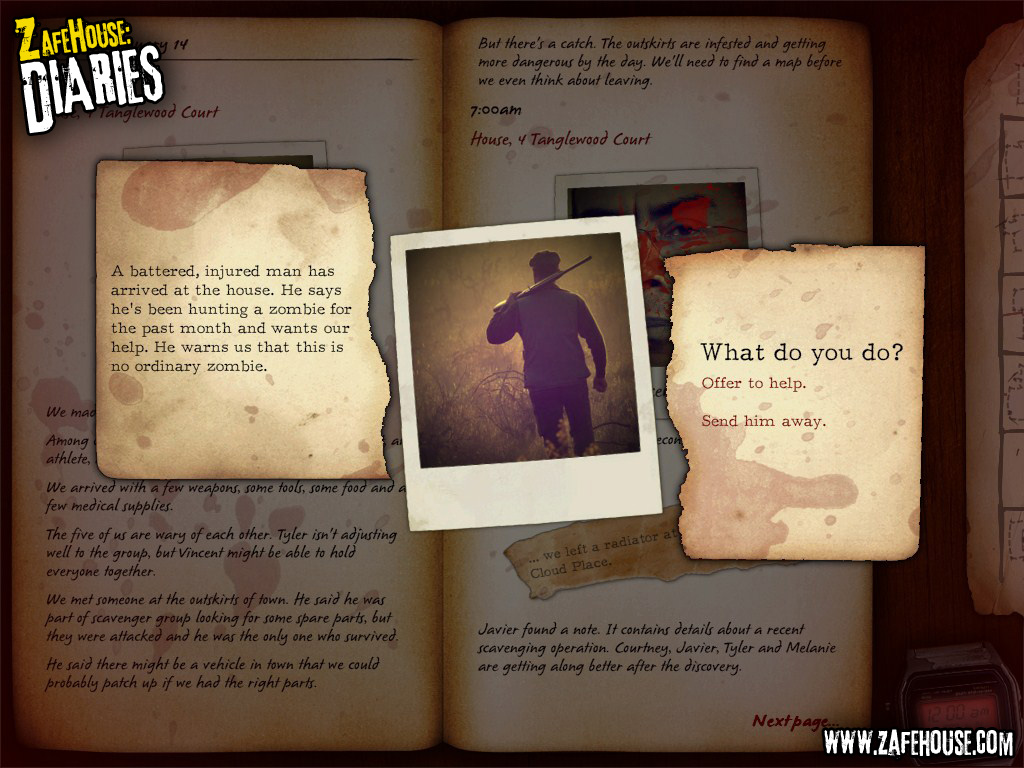 Zombies are kind of a huge thing in pop culture right now.  A lot of things caused this, like The Walking Dead on TV and films such as Shaun of the Dead. The supply of games with zombies is even more endless. Games that once used Nazis or demons now have made zombies their go-to baddies. That makes finding unique zombie games almost impossible, everything is either top down shooters with zombies or FPS that shoot zombies. A few weeks ago I stumbled upon Zafehouse Diaries, a game that changes that mold.

Rather than being about shooting zombies, ZafeHouse Diaries is about survival. Five randomly created survivors have found safety in a house during a zombie outbreak. All they know is that in a week’s time a helicopter is coming for them.  The basic goal is to keep everyone alive and find the location for the rescue. That’s all easier said than done.

ZafeHouse Diaries is a hardcore strategy game with the look of a board game. The main screen of play looks like hand drawn map of a town. Each of your five survivors is represented by a small colored token on the map. Their photos are spread out along the bottom of the screen and by clicking on them you can see various stats and info. To the right of the map are the instructions you can give your survivors. For example you can have a character start boarding up a location, or assign someone to watch duty. After you have assigned tasks to everyone, you click the wrist watch in the bottom corner. This forwards you clock ahead an hour and brings up the diary screen. The diary screen tells you how all your choices unfolded. Did you send someone in alone for supplies or were all you characters over whelmed by too many zombies? This all gets explained on the diary screen as an entry from a survivor. At the end of your game (whether you survived or not) you’re actually asked if you want to save this adventure as a text file.

The rules are quick and easy to pick up. By the second or third turn you will have the gist of the game. The really intriguing part of the game is the relationship mechanic. As I said before, all your survivors are randomly created and so are their personalities. One character might be an uneducated, poor, Asian janitor while another could be a rich white, racist surgeon. That can make working those character together dangerous. They could fight or even kill each other, if left to their own devices. The game provides you a small chart screen pointing out how people feel about each other. It is a unique mechanic that makes every game drastically different.

So far, out of the two dozen or so attempts I have made, everyone has died. This game is HARD! I won’t mesh my words when I say that. The game doesn’t ever feel like it is cheating, but it does severely punish you for bad choices and sometimes the randomness can screw you over right from the start.

Even though I have had some challenges, my time with ZafeHouse has been great. Even when I lose, the next game is only a quick button press away. It feels like this could be a great iPad game if it was tuned up a bit. The game has been a great companion for me while I watch Netflix. You can find Zafehouse Diaries over on GOG.com and it gets a strong recommendation from me, especially if you’re looking for something very different.