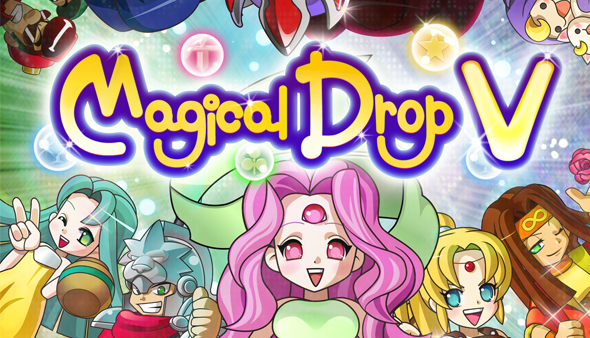 Puzzle games like Tetris, Dr. Mario, or Bejeweled, have been the forefront of the genre since its conception. Other lesser titles like Dr. Robotnics Mean Bean Machine, Puzzle Quest, and Bust-a-Move have attempted to have major roles in the puzzle genre.  The puzzle genre is very competitive, but extremely profitable to those that can make it work. Just look at the name Popcap has made for its self by focusing on puzzle games!  With all those games out, I’d like to discuss a long time over shadowed puzzle series called Magical Drop. This week, the most recent game Magical Drop V was released on Steam and I thought I would share some love with a unique Japanese puzzle game.

The core of Magical Drop V and it predecessors are a basic match-three-gem game in the style of Dr. Mario meets Bust-a-Move. In fact, the first time I saw and played a Magical Drop arcade machine, it was mislabeled as Bust-a-Move. Both games have similar aesthetics but different core mechanics. Each player in Magical Drop controls a jester character at the bottom of their window, moving him left and right. At the top of your window, the game projects layers of colored gems that you then need to use the jester to move. He can only carry one color at a time though, so you must use your quick organizational skills to prioritize which are the fastest to go. Your opponent is in a different window doing the same thing as you. As you each cause chain reactions by clearing multiple colors in single moves, it forces new layers of gem on your opponent. The first player to clear 200 gems or have their opponents gems pushed to the bottom of the screen wins.

Match-three-gems and battle puzzle games are nothing new, but Magical Drop has been a series that has always done well. Besides being a puzzle game, it feels more like a fighting game than just a puzzle game. The ideas behind the game are fairly simple but hard to master. You begin by picking your character, which is based on each card in a tarot deck. Each character seems to have a lot of personality but I couldn’t tell you what they are saying because the series has always kept the voice overs in Japanese. Personally I find that endearing but it’s not for everyone. Also, each character has a distinct pattern they cause to fall on your opponent.

As with all long living series, Magical Drop has changed quite a bit over the years. Some of the mechanics have changed slightly since the last version I played, but not enough for anyone but the truly hardcore fans notice. Also, this version does not have some of the crazy single player modes that the Arcade versions had. Instead, they have chosen to focus on the online multiplayer aspect that they could not do in previous iterations.

I have been eagerly waiting for this title for quite some time. The announcement for it was in 2010 but took until almost 2013 to get released. There were rumors of it to be in limbo for a time due to some strange rights holder issues, but I never got concrete news or evidence. Despite all that though, my overall experience with Magical Drop V has been overwhelmingly positive. It had a few small day one bugs, but those were ironed out right away. I would suggest it to anyone looking for a good puzzle game this holiday season.