Splatoon: Worth The Mess

Nintendo needs new intellectual property to work with since they haven’t explored uncharted territory after Pikmin on the GameCube. That can be debated from now until the mushrooms come home, but it is a fact that Nintendo hasn’t touched one of the most popular genres in gaming: Online Shooters. Until Splatoon, that is! It’s new across the board for Nintendo: New look, new characters, new story, new music, all wrapped up in an inky, family friendly package! Not only does it give us something completely fresh, it gives Nintendo’s developers a much needed outlet of creativity. 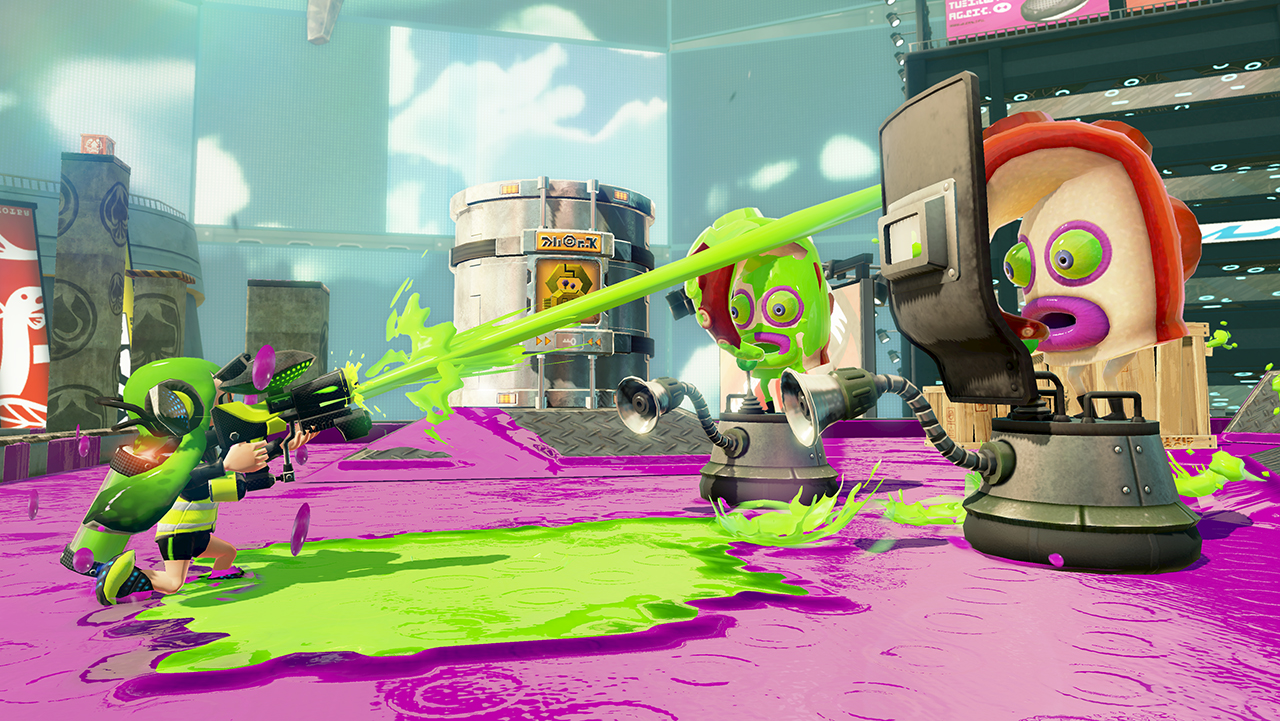 Square off against the Octarian Army in the single player campaign.

Before we deep dive into what makes up Splatoon, let’s go over the basic mechanics. You play as an Inkling, Boy or Girl, that spreads ink using many different types of weapons. When shooting, you are in Kid form, but with the hold of a button you transform into a Squid. Squid form lets you move within the ink you’ve been splattering around so madly, allowing you to sneak up on enemies or quickly traverse the battlefield.

Splatoon’s main offering is its online multiplayer, and it will keep you coming back. At launch you’ll have access to Regular Battles, a mode that features the Turf War game type on two of the five available maps. Turf War is a fast paced, three minute, four on four burst of fun. The objective is to cover as much of the map as possible with your teams colour of ink.

Turf War is where I spent most of my time for multiplayer. Online shooters usually focus on taking out the opposing team as the primary objective, but with Splatoon, inking the map takes top priority. However, splatting your opponents is key to winning, as the respawn timer keeping them away from inking territory allows your team to cover more ground unopposed. Find yourself getting cornered in your base or need to jump back home to save some Inkling friends? Not to fear! With the tap of the GamePad you can Super Jump to any teammate on the displayed map. It’s a great traversal feature that also gives you a bird’s eye view of the action. Weapons you have access to in multiplayer range from a normal ink shooter to a paint roller, so if you’re looking to mix things up on that front there’s always something new to try. Turf War is a great game type and makes for an awesome online gaming experience. These days it’s more about that “one more time” attitude. With three minute matches it’s a great way to spend anywhere from 10 minutes to a few hours.

Once you reach Rank 10, you unlock Ranked Battles where wins and losses count as you battle it out in the Splat Zones game type. During my two weeks with the game, Turf War kept me occupied and it was always fun to splat enemy Inklings. In the long term though, the limited multiplayer offerings may not keep you coming back. Nintendo is hoping the slate of content batches coming this summer will help calm gamers, but it’s a wait and see type situation. You have the ability to jump into matches with friends, but there’s no friend matchmaking. Meaning no teaming up with four friends or setting up custom games of eight people you know (Nintendo plans to add this functionality through a patch in August). Oh, and no voice chat at all, but that is to be expected from Nintendo. Perhaps we’ll get it eventually for chatting strategy in the lobby with friends like Mario Kart 8, but I’m fine having Skype running on the iPhone.

When it comes to Nintendo titles, there are two technical questions on people’s minds. First, how well does the online functionality perform? Second, what kind of motion control will I have to use? Let’s start with online performance. Due to the review process being limited to media, matchmaking would take some time to find enough players for a full game. During scheduled times like Global Testfire and a media event, matchmaking was quick and painless. The true test will be when the game launches, to see what kind of community forms around Nintendo’s new shooter. When 8 players were found, online play was solid with no lag. When lag did appear, I noticed that my ink wasn’t actually painting, which pulled me right out of the experience. But again, it didn’t happen often. Out of the 50 plus matches played, I only dropped from a match twice.

Motion control, it’s there and enabled by default. You can use the GamePad’s gyro to aim, which sees you using the left stick to move and tilting the GamePad around to move the reticle. While it worked, I didn’t realize how much it was holding me back until I turned on right stick aiming controls. If you’re opposed to the motion control, feel free to turn it off, the game allows you to do that for a reason.

When an online shooter is announced, there’s normally a campaign to go alongside it. Sometimes it gets a good amount of attention, for example the next Halo, other times it’s wedged in using voiceovers and video overlays like Titanfall. Splatoon’s single player offering surprised me as there was a lot of thought and work put into it. When you’re in need of a break from splatting people around the world exit the Lobby and head back to Inkopolis, the hub world of Splatoon. From there you’ll find a sewer grate leading to the wonderful world of Octo Valley, where you’ll battle it out with the Octarian Army (sworn enemy of the Inklings). Single player is split into multiple worlds, with each one hosting a grouping of levels and culminating with a fun and creative boss battle. Single player levels feel a lot like Super Mario Galaxy and Super Mario Sunshine combined; a place where you’re skipping across platforms and battling minions with your ink. New obstacles are thrown at you throughout the campaign, so things never get stale. My favourite early hurdle were sponges that soak up your ink to allow you to reach higher platforms and squid jump across chasms. Some of the most fun I’ve had in this game has been with the single player as it offers new gameplay mechanics around every corner. That being said, some levels based on bot shoot em ups that try to replicate the online mode feel a little dull in comparison, but they’re still fun to go through and only pop up once per world.

If the single player levels reminded me of Galaxy and Sunshine, the boss battles felt like they could be baddies ripped straight from the Mushroom Kingdom. They look awesome (also a little creepy) and are a blast to take down. Like most Nintendo bosses, you’re employing the rule of three and hitting weak points to stun. But the coolest part is that they take a combination of all your abilities to take down effectively. While there were fewer of these experiences than I would have hoped, the few offerings that did come up feel special and rewarding.

While Turf War and Octo Valley make up a large portion of the game, there are a few modes that I missed for some reason or another with my play time. First up is Ranked Mode as I didn’t quite make it to Rank 10, but with Nintendo’s post launch plans, this mode will be further explored in the weeks to come. 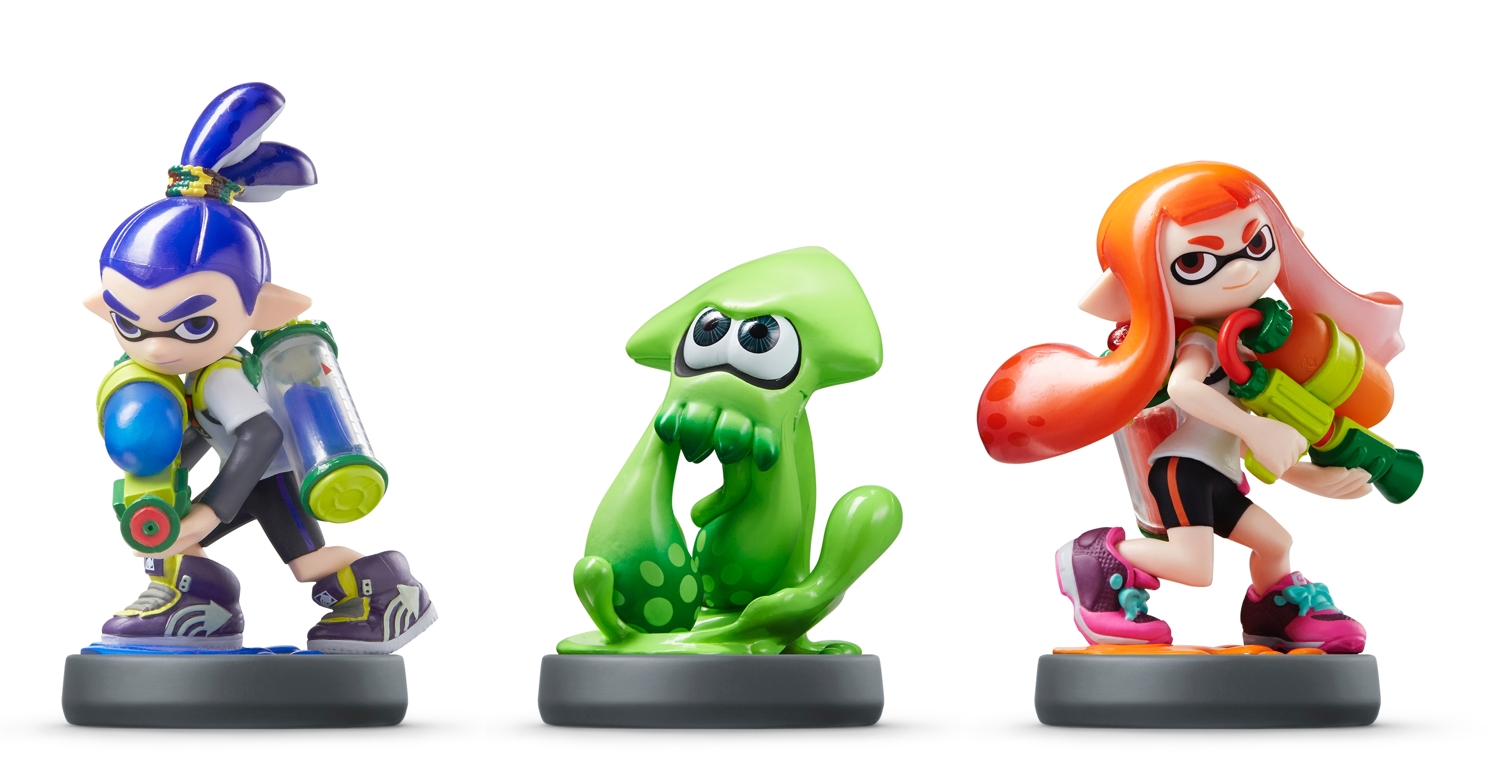 Inkling Boy and Girl sold separately, but you’ll need the three pack if you want the Squid.

Second would be amiibo, as I have those coming in the mail for launch on Friday. They unlock special challenges for already conquered single player levels. Updated impressions will surely be heard on the Gamers’ Inn podcast in the coming weeks.

Finally there’s Battle Dojo, a local multiplayer mode where one person uses the GamePad and the other a combination of the TV and Pro Controller. I only found a need for the online multiplayer modes, but for those who look for couch co-op, that mode is in here.

If You Own a Wii U: It’s not very often Nintendo unleashes a new IP or a new game on Wii U. The campaign offers that Nintendo charm you’ve come to know and love, and the multiplayer is fast and furious. You’ll be happy to add this game to your Wii U collection.

If You’re Looking to Buy a Wii U: You’ve probably got quite the list of games added to your “Games I Will Play If I Buy A Wii U” list. I feel like Splatoon belongs on that list alongside Mario Kart 8 and Smash Bros. as it offers a unique take on online shooters with a solid campaign to distract you when you’re all splatted out.

Bottom Line: Online shooters don’t often hook me, but the simple fast and furious inking that Nintendo has cooked up with Splatoon keeps me coming back for more. Whether it’s a quick three minute match in Turf War or running through a couple of levels in Octo Valley, I was always having fun. Do yourself a favour and track down Splatoon, it’s worth the mess!

Splatoon was reviewed using a Pre-Launch Review download provided by Nintendo. Online experiences were evaluated during normal play sessions, Global Test Fire events and a scheduled time for all media to connect and play.