In a day and age where there is a distressingly and ever-increasingly large amount of pre-release information available on pretty much any and every video game title, the need for the review might be coming to an end.

But don’t tell that to the video game reviewers who, from all appearances, seem to be taking their job ever more seriously with each year that passes. No longer are they content with telling you if they enjoyed the game, rather, every conceivable nit-pick is required – but whether by the reviewer or the reader, I’m not sure.

While it’s not my primary profession, I have been reviewing fantasy books since 2008. That’s over 300 reviews of a variety of books ranging from the absurd (‘Brisingr’ by Christopher Paolini) to the sublime (anything by Steven Erikson and Terry Pratchett). I started out reviewing because I simply needed to tell someone about the book that I had just finished reading, and that’s pretty much why I still review after all these years. I want to debrief myself – write out an attempt at understanding what I just read, if I liked it, and if so, why (and if not, why not?)?

I do it because I love fantasy books, and I want you to love this or that particular book.

I have been criticised, however, for scoring too highly too regularly. And it’s a legitimate criticism, to a point.

You see, two things determine why my review scores hover primarily between 6 and 9:

It is this second point that I think video game reviewers have decided to avoid, and I think they’re doing themselves a disservice.

Back to my fantasy book analogy. When I review a book, the very fact that I’m reading the book is a pretty good indication that I liked it; as mentioned, I go out of my way to choose books which appeal to me. However, that doesn’t mean I don’t come across some stinkers. I’ve only ever not finished one book (no, I won’t tell you what it was) – everything else I have ploughed through, because in most cases, there was at least one attribute about the book which I enjoyed. It might be the lead character’s sister, a dog, the way the author had built the magic, or the great work of the editor. And I make sure I say so in the review, as well. (I also legitimately explain the things I found negatively impacted my reading of the book, but I don’t let those dictate my review.)

In short, I give a book 10 stars, and then take stars away depending on how enjoyable it was, its negative and positive attributes, etc, etc.

On the other hand, I think that video game reviewers start with 0, and only add stars when something is demonstrably brilliant. They’ve forgotten why they’re doing it, and for who they are doing it – video game fans who like playing video games. The very fact it’s a video game that has graphics should give it at least a 2 (out of 10). Was the dialogue a bit lacklustre? OK. But what about that one character who continually made you laugh – why didn’t you let that add a star? How about the game mechanics that did work, why didn’t you let those add a star, instead of just refusing to give it any stars for game mechanics because you can’t shoot straight?

I understand that a lot of these reviewers consider themselves the new internet journalist, and want to adhere to a certain degree of journalism ethics: Trust me, I understand, because I am one of those new internet journalists (it’s my day job). But you’re reviewing a video game! You got into this because you enjoy playing video games, not because you enjoy picking apart poor-coding and graphic design.

Trust me, start at 10 rather than 0: Deduct stars that require it, but don’t feel the need to pander to those 3 guys who pop up in your comments all the time – they might not have liked the game, but I know them, they don’t like anything! You do! Don’t be that person! 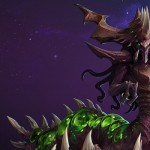 Let's start off with some positivity shall we? A local gamer in Ryan's neck of the woods had his 13th birthday on Friday and people all over the world are wishing him a Happy Birthday. Join in on the positivity and show everyone the internet is still an awesome place…

Welcome to a very casual episode of The Gamers' Inn, we didn't play a whole lot this week so we just talked about video games in general! First up, Ryan purchased a Toad amiibo and Jocelyn talks about the upcoming TACO tournament. Next up the innkeepers convert What We've Been…